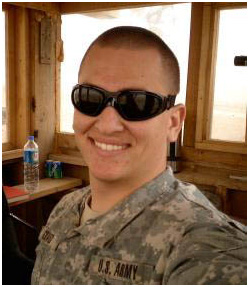 As the proud father of Spc. Joseph A. Graves, US Army, I would like to thank you for the overwhelming support in celebrating his life. I thought I would share a little about Joey with you, how he grew up and what influenced his life. This might give some insight as to the reason that Joey, along with thousands of others, volunteer to join the military, to protect our freedoms, to fight terrorism, and to liberate those around the globe who suffer under regimes of tyrants.

Joey’s mother, Maryan Perriera, and I divorced when he was three years old. For the next seven years Joey was raised by his mother. Yet we still did a lot of things together. Cub scouts, Little League, the usual stuff. His mother and I vowed that we would always do what was best for Joey. We have stood by that faithfully, even to this day, by participating in events together to honor his memory and celebrate his life.

When Joey was 9, his mother and I decided that he should come live with me. The next nine years were the greatest of my life. Joey and I were best friends and we truly participated in each other’s lives. He taught me to be a dad, as I did my best to teach him to be a man.

Joey was always active in our church and this is when his understanding and acceptance of Christ occurred. He took a leadership role in the Youth Group and later, during his tour in Korea and in Iraq, he showed how important his faith was to him, as he started a Bible Studies and led other soldiers to Christ.

At seventeen years of age, much to my surprise, he decided to enlist in the Army through the delayed entry program. He chose the Military Police, because his goal was to be a FBI field agent. He graduated from Liberty High School with a 3.8 GPA and went to Basic Training. We were extremely proud of him.

After completing Basic, Joey went to jump school to get his wings. He then went to Yong San, Korea for a year’s tour. Joey returned from Korea in March 2005 and after spending a short time at home on block leave, he and I made the long drive to Ft. Hood, Texas. This was a great road trip and the last time we would we spend a lot of time together.

On September 24, 2005 Joey married his high school sweetheart, Cori Manningas. Two weeks later and a month before deployment, he returned home, to Discovery Bay, to be the best man at my wedding. Three weeks later he was deployed.

Over the next eight months, I heard from Joey often. Whenever I showed concern, he would always say, ‘Don’t worry Dad, we’re in one of the safest areas of Iraq’. That wasn’t exactly true. 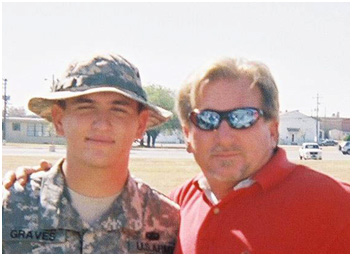 On 25 Jul 06, 1st Platoon was on an escort mission outside of Baghdad, 400 meters from the next checkpoint they were hit by what was described as a ‘well orchestrated ambush’.

There was one casualty. Joey, my only son, my only child, was killed when his HumVee was struck by multiple IED’s. I cannot find the words to express how proud we are of Joey.

We, his family, love Joey very much. We also love this country and are proud to be Americans. We know first hand, that ‘Freedom is not Free’. Thank you for your patriotism, your support and for honoring a soldier, a son, a husband and a friend.